“They say that the most important thing is to be yourself. I work twice more in order not to think about it”

According to the survey within the project “Global Assessment of Values” conducted in 2020, 44,8% of Ukrainians do not want to live next to the representatives of LGBT+.

What is the reason? How does this hatred between people appear? Why did the faith, the values and orientation of a person become reasons for oppression and persecution? Why did the word “tolerance” become so repugnant for some part of the society? And is there a way to make the world better through communication?

These were the questions we asked at the beginning of our hardest project of 2021 for the civic organization “Sphera” and KharkivPride.

We decided to address science to find the answers and took into consideration the findings of Milton Bennett – sociologist, specialist in interpersonal communication and professor at Portland University.

Having studied various cultures for many years, he came up with the Developmental Model of Intercultural Sensitivity which depicts the evolution of acceptance of the difference in opinions, traditions and orientations in the society.

The model shows that a person has six different stages before accepting the other culture:

Thanks, Milton for the great model. It helped us understand two things.

First of all, Ukrainian society is not spoilt. The point is that it still has not passed the basic stages of its interpersonal development like any other country and groups of people do. Moreover, our objective is not to solve the issue of tolerance absence in the society. We aim at urging a group of people to move to the next stage of the model.

The only thing is to understand what group of people it should be.

After a series of in-depth interviews, it became clear that working with the first two groups would be ineffective - their representatives have too many subconscious stereotypes as well as a too high degree of rejection of LGBT+ people. It would be extremely difficult to change their attitude to this topic in one campaign. Working with three other groups also had little sense since these people already possess some level of tolerance to the community.

This is how we understood the target audience of our campaign. These are the people who have already passed the first two stages and already recognize the LGBT+ community but keep their distance due to prejudice and ignorance. Our task is to push them towards the acceptance.

Studies show that the fear of unknown is the main reason why the target audience distances from LGBT+. Having no open representatives of the LGBT+ community among their friends and relatives, people base their opinion about them on the most visible manifestations: prides, mannered gay images in movies and aggressive appeals in the media. But once a person has the first gay, lesbian, bisexual, or transgender friend, his or her level of tolerance automatically increases.

That’s because they find out that real people have nothing to do with scary pictures in their mind.

Thanks to this insight we came up with a simple idea: in order to help the audience take a step towards the acceptance of the LGBT+ community, it is necessary to "introduce" it to the representatives of the community, tell the stories of ordinary people, and to evoke the usual human empathy for their drama among the audience. The whole team spent a couple of weeks collecting real stories of LGBT+ people who, for various reasons, did not come out. Each of the stories depicted the drama of a person in society. But how do you motivate people to fully watch the video on a topic they try to avoid?

Coming-out from heterosexual leaders of opinions.

That’s how we came up with the idea of the campaign. Six people, six LGBT+ stories told by Kharkiv leaders of opinions who also do their coming-out in the beginning…by telling the story of the other person. These are the stories of six people who live among us but cannot tell the truth themselves.

The campaign received a large number of views, publications, and media coverage. Users of social networks had heated discussions on this topic some of them changed their minds about the LGBT+ community. 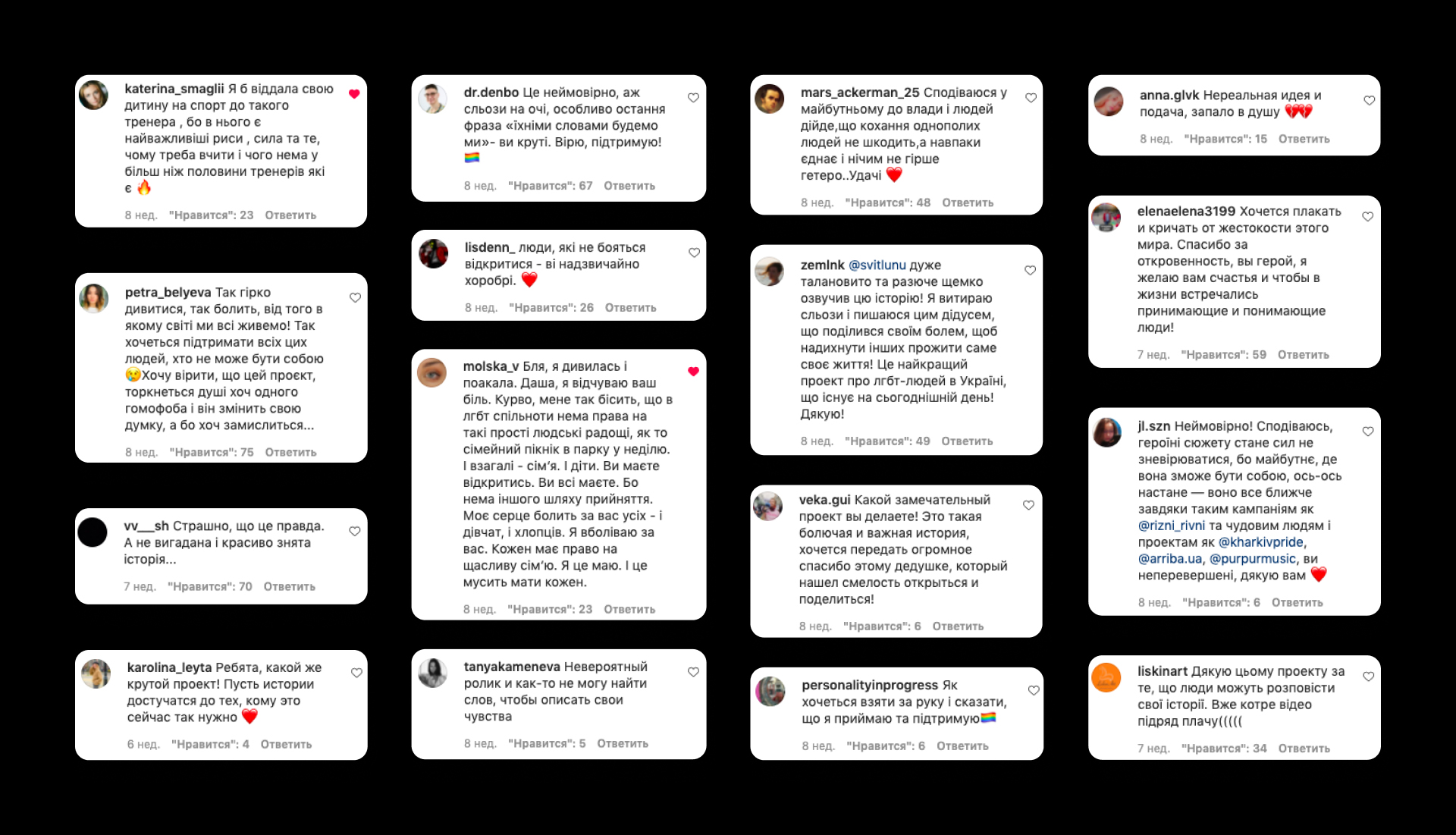 But the most unexpected outcome for us was the case of Roman – Ukrainian soldier whose story was told by Artem Vusik. Once all the videos were published, Roman opted for a public coming-out. 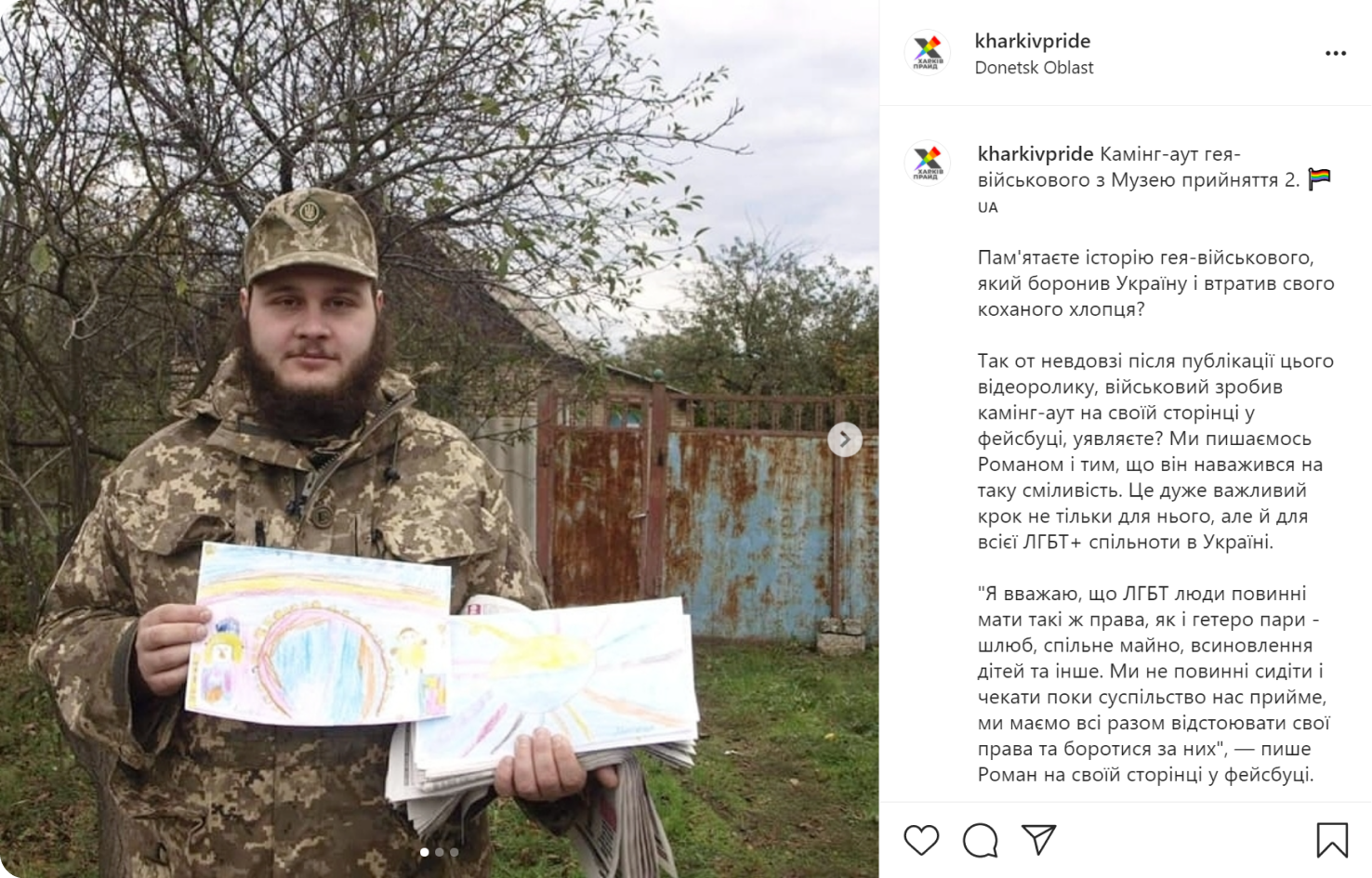 We hope that this campaign will not only influence the level of tolerance and acceptance of LGBT+ community in Kharkiv and Ukraine but will also be a ground for all its representatives to openly talk about themselves.

Until they can’t speak for themselves, we will be their voices. 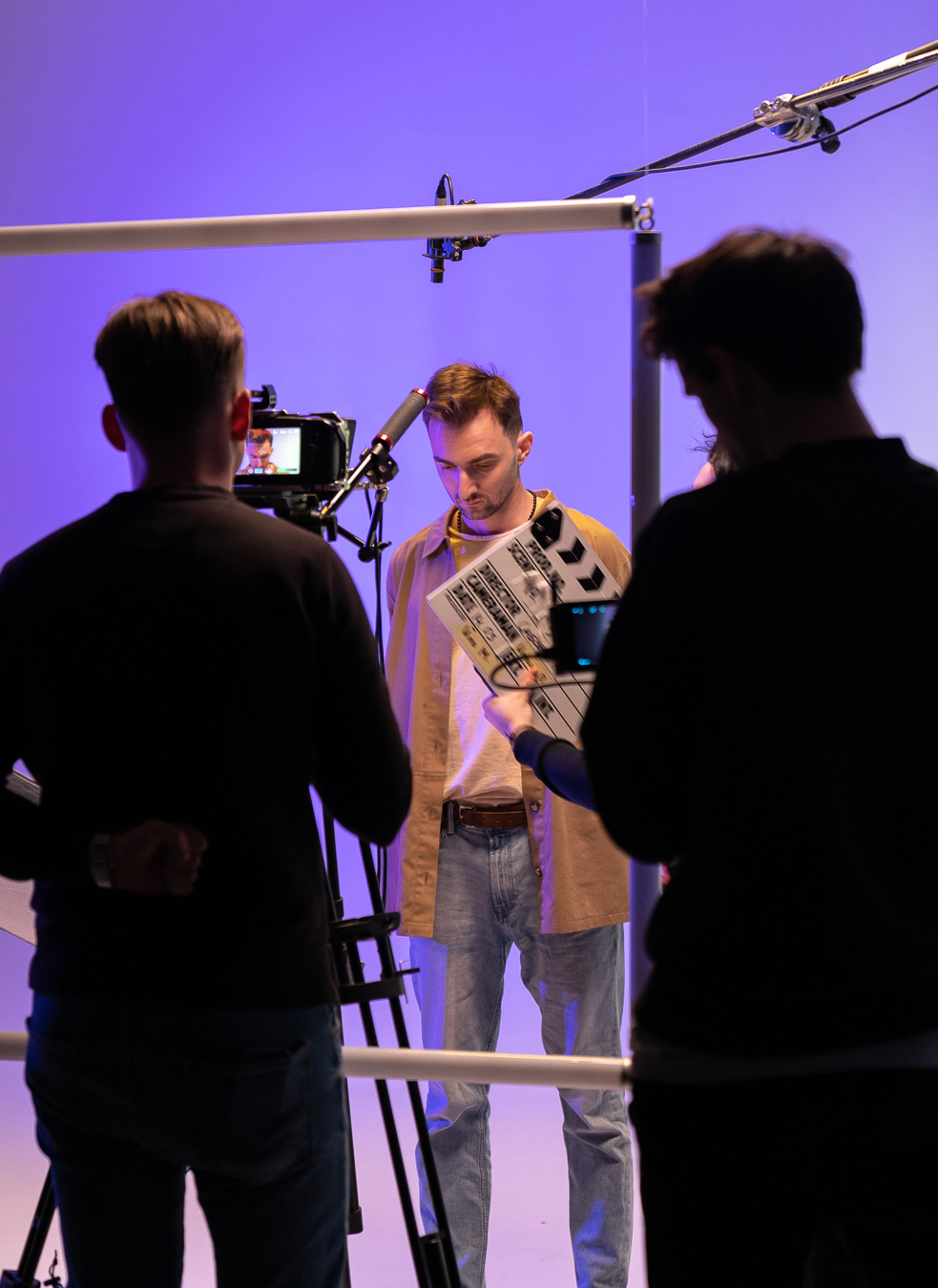 The communication campaign was developed for the civic society Kharkiv Women’s Union “Sphera” in order to support the campaign Rizni.Rivni with the aid from the National Democratic Institute in Ukraine and the Governments of the UK, Sweden, and Canada.